Here is my fantasy NASCAR preview for the Martinsville race:

If you want to talk NASCAR or discuss fantasy NASCAR, hit me up on Twitter @HuskerMagic

5 years. NASCAR fans endured 5 years of what most certainly will be remembered as one of the most dominant eras of the sport. Year after year, fans complained about how one driver, Jimmie Johnson, was too bland, too nice, and too simple. And he won too much. Way too much.

change the track back at bristol

bruton smith has an email address to send your opinion of if they should or not change the track back.

i said i would like to see them re reconfigure it back.it was unique.

this is a case of "if it aint broke,dont fix…

This week the Auto Club 400 will be held at Auto Club Speedway in California, which will be the only event at the track, a tradition started last season after seven straight years of holding two events annually.Auto Club Speedway opened in 1997 and is a D-shaped two-mile oval, most similar to Michigan in my opinion. Expect the same familiar faces up front on Sunday, with maybe one or two surprises in the mix at one…

Here is my article from Bleacher Report for my Fantasy picks for Fontana. If you play Yahoo or NASCAR.COM game, you should check it out. Fantasy NASCAR Picks for Fontana

Here is my article for my Fantasy Picks for Bristol.

Currently I am 99% in Yahoo Fantasy Auto Racing and Ranked #279 overall in Fantasy Live. Good Luck this week!

If you need any help with your fantasy team, I would be happy to offer my advice. Hit me up on Twitter @HuskerMagic or check out my…

Get ready for some good old fashioned beating and banging on Sunday afternoon because the Sprint Cup Series is heading to Bristol! Just as a heads up, Brian Vickers is in the #55 Toyota this weekend, so nobody's fantasy rosters are safe. Just kidding--I expect "The Sheriff" to be on best behavior in all of his races this season. Nicknamed "The Bullring," Bristol Motor Speedwayis 0.533-mile race track in Tennessee that… 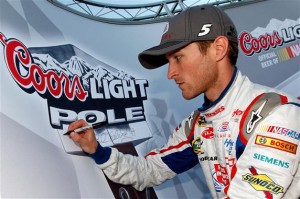 For the first time this season, we get to see…

As the 2012 NASCAR Sprint Cup season is taking shape, the sport heads out to Nevada for it's annual visit to Sin City. A fan-favorite track for the city life, area, and competitive racing, the Kobalt Tools 400 is always a race I look forward to every year. While Denny Hamlin and Greg Biffle have gotten off to fast starts, usual contenders such as Jeff Gordon and Jimmie Johnson find themselves outside the top 20 in points. The Cup…

This week, the drivers of the Sprint Cup Series will be in Sin City for the Kobalt Tools 400. You can gamble on slots in Las Vegas, yes, but I feel like races here are also a good time to do a little gambling in fantasy leagues. Unlike last week in Phoenix, no active driver really dominates at this track on a consistent basis, and there tends to be new faces up front each race (possibly because there's only one event…

Yesterday (Tuesday) I was able to interview Joey Logano. He told me about how the changes to his team over the offseason are setting him up for success in 2012, how he would be a hockey player if he was not a NASCAR driver, and the difficulties of racing in the NASCAR Sprint Cup Series at such a young age.

You can read the article here:…

Fantasy Picks For the Kolbalt Tools 400 in Las Vegas

Two races are in the books and the drivers are finally starting to reveal what they have for the 2012 season. Just in time for their trip to Las Vegas.

Denny Hamlin looks to be in a bounce-back year. Hamlin was the odds on favorite to finish second in the point standings in 2011. After a disappointing season, Hamlin was teamed up with the defending NASCAR championship crew chief, Darian Grubb.…

Hey Everyone, new series coming soon.  I haven't had time to do any other series like the old site(nascar.com) so this is in place.  I can't give it all away now, but it starts next week.  Simply, a member off this site gets put in the spot light.  It's away for people who are new or old to get to know one another for a first time or better.  If you're the spot light member, you can say whatever you want about yourself. What you want people to know about you. The whole point of the ask point… 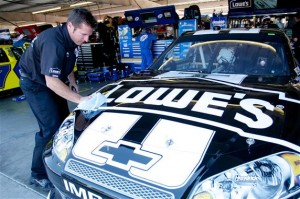 The last time that the Sprint Cup Series visited Phoenix International Raceway was a sort of "first time" for all of the drivers. After the first race here in 2011, the "old Phoenix" was re-constructed into the Phoenix we now know. With a new pavement came some new faces up front as well, with Kasey Kahne grabbing his first win at Phoenix for Red Bull Racing and notching just his…